Traditionally, one ensures the security of an application by ensuring that the system software, i.e., the hypervisor, operating system and cloud software is trustworthy. This not only protects the integrity and confidentiality of the system data but also protects the security of the applications. A service provider running applications in the cloud must trust all system software and also all administrators who have root or physical access to these systems.

A popular way to intrude into a system is to steal the credentials of a system administrator. With these root credentials, one gains access to all data being processed in this system as well as all keys that are kept in main memory or in some plain text files. If stealing credentials would be too difficult, an attacker will look for other ways to attack a system, like, exploiting known code vulnerabilities.

For an attacker, it might be sufficient to exploit a single vulnerability in either the application or the system software to violate the application security. The problem is that the defenders must protect against the exploitation of all code vulnerabilities that might exist in the source code. A service provider might not have access to all source code of the system software that the cloud provider uses to operate the cloud. Even if the source code were available, this will typically be too large to be inspected.

To show that this is a difficult problem, let's look at the number of lines of source code of common system software components. While lines of source code is not an ideal indicator for the number of vulnerabilities, it gives some indication of the problem we are facing. Some security researchers state that given the current state of the art, only code with up to 10,000s of lines of code can be reasonably inspected. Just the system software itself contains millions of lines of code. This is orders of magnitudes more than we can reasonably expect to be able to inspect.

SCONE runs on top of Linux - which contains millions of lines of code and is still growing in size with each release: 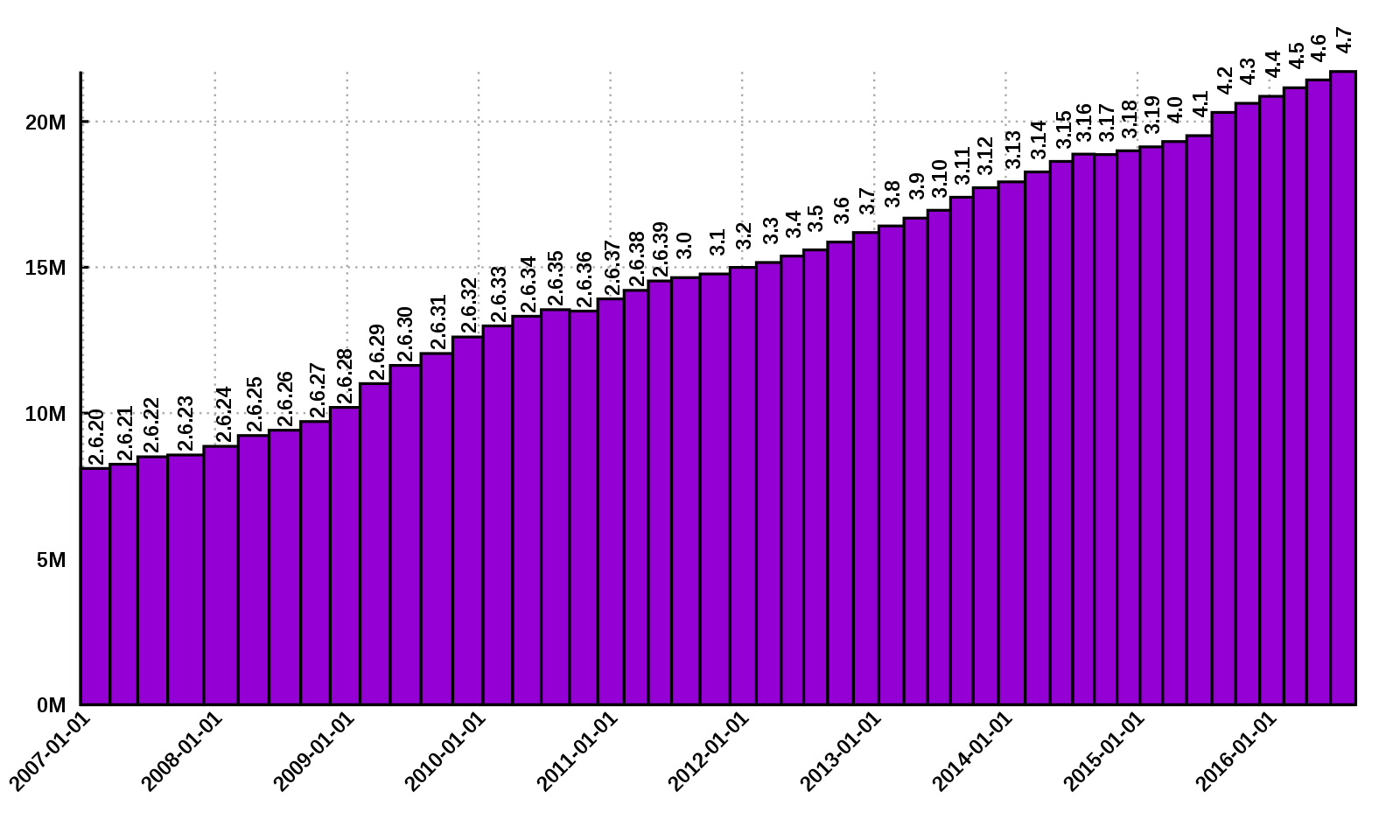 OpenStack is a popular open source software to manage clouds. OpenStack - despite being relatively young - has been growing dramatically over the years that it has already reached 5 million lines of code (including comments and blank lines):

To manage containers, we need an engine like Docker. Docker is younger than OpenStack but has nevertheless reached already more than 180,000 lines of code:

Code complexity.There is no one-to-one correlation between lines of codes and bugs. Static analysis of open source code repositories indicates approximately 0.61 defects per 1,000 LOC. A recent analysis of Linux shows that, despite an increasing number of defects being fixed, there are always approximately 5,000 defects waiting to be fixed. Not all of these defects can, however, be exploited for security attacks. Another analysis found that approximately 500 security-relevant bugs were fixed in Linux over the past five years - bugs that had been in the kernel for five years before being discovered and fixed. Commercial code had a slightly higher defect density than open source projects. Hence, we need to expect vulnerabilities in commercial software too.

The approach of SCONE is to partition the code and to place essential components of an application into separate enclaves. Practically, it is quite difficult to split an existing code base of a single process into one component that runs inside an enclave and a component that runs outside of an enclave. However, many modern applications - like cloud-native applications - are already partitioned in several components running in separate address spaces. These components are typically called microservices. This partitioning facilitates a more intelligent scaling of services as well as a scaling of the development team.

Current SGX-capable CPUs have a limited EPC (Extended Page Cache) size. If the working set of a microservice does not fit inside the EPC, overheads can become high. The usage of microservices supports horizontal scalability. This helps to cope with limited EPC (extended page cache) by spreading secure microservices across different hosts.